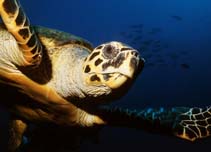 Indo-Pacific and the Atlantic Ocean.

Commonly received attention from several males, polygamy. It has been observed that male holds the female by using its claws and tail while mating at shallow areas lasting for several hours. This species is considered to be a solitary nester which is confined between 25°N and 35°S. Nesting occurs mostly toward the end of spring throughout the summer with a nesting cycle of 2 or 3 years with a mean of 2.6 years. Renesting intervals lasts for 2 to 3 weeks with an average number of 2.3 clutches per season. The duration of incubation lasts 47 to 75 days but varies depending on place and time. Generally, hatchlings emerge when sand is below 28°C during the first hours of the night. They find their way rapidly to the surf zone and disappear for some time until they reach their age when they are mature enough to nest (Ref. 1397). Temperature-dependent Sex Determination (TSD) is demonstrated in this species (Refs. 83975, 83972, 83977). DNA samples from females and their offspring show that the number and which breeding males are involved can be identified. Female turtles mate at the beginning of the season, probably before migrating to nesting beaches and the sperm is stored for usage over the next couple of months. Each female mates with a different male showing that the their population is genetically viable (Ref. 92951).