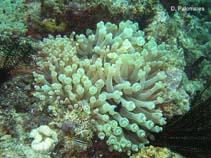 Indo-Pacific: Micronesia and Melanesia to east Africa and the Red Sea and from Australia to Japan.

Tentacle up to 10 cm in length and are usually brown with bulb at or below the end. Tip of the tentacle is usually red with the equator of the bulb white. Bulb is said to be related to presence of fish and may be absent in which case tentacles have a white ring where the equator of the bulb would have formed. Shallow water specimens have small polyps with oral disc diameter about 5cm and are clustered together in crevices or adjacent to coral branches so that they appear confluent and forms an extensive field. In deep water they may reach up to 40cm diameter (oral disc) and are solitary.
Commonly attached deeply in crevice or hole so that only tentacles are visible (Ref. 9810). Attached specifically deep within a crevice on coral reefs and among rocks (Ref. 102838). Collumn without verrucae and usually brown, sometimes reddish or greenish. Oral disc same brown color with tentacles and these tentacles collapse when disturbed (Ref. 9810). Solitary (Ref. 2377). Host to the clown fish Amphiprion clarkii (Ref. 102838). Sea anemones in general feed on various invertebrates; some are suspension feeders (Ref. 833).

Members of the class Anthozoa are either gonochoric or hermaphroditic. Mature gametes are shed into the coelenteron and spawned through the mouth. Life cycle: The zygote develops into a planktonic planula larva. Metamorphosis begins with early morphogenesis of tentacles, septa and pharynx before larval settlement on the aboral end.