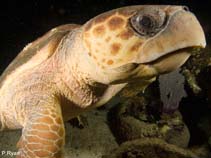 In adults, the carapace in dorsal view is heart-shaped; its width about 76 to 86 percent of its length. Head large; broad and subtriangular; 23 to 28 percent of carapace length; with 2 pairs of prefrontal scales; and commonly one inter-prefrontal; horny beak very strong; comparatively thicker than in other sea turtles. Carapacial scutes: thin; but hard and very rough; commonly covered with barnacles. 5 pairs of laterals; the anterior touching the precentral scute; 5 centrals (neurals); and commonly 12 or 13 pairs of marginals; including the postcentral or pygal scute. Underneath the bridge of the plastron; 3 pairs of inframarginal scutes which rarely have pores. Fore flippers relatively short and thick; each with 2 visible claws on anterior margin; rear flippers with 2 or 3 claws. Hatchlings and juvenile turtles have blunt spines on the carapace scutes; forming 3 longitudinal keels that disappear during the juvenile stage. Color: Adults have constant dorsal pattern; easily recognizable by the reddish brown coloration; sometimes with dark streaks (South African turtles); that become orange-creamy on the flanks and yellow-creamy underneath. Hatchlings are dark brown dorsally with the flippers pale brown marginally and underneath; and the plastron usually is much paler.
Migratory (Ref. 417). Inhabits shallow thermocline at 50 m with strong thermal and chlorophyll gradients and surface convergent fronts (Ref. 78527), continental shores of warm seas and common in shallow waters (Ref. 1397) and brackish water estuaries (Ref. 417). Feed widely on variety of invertebrates especially bony fishes (Ref. 804). Nesting grounds associated with underwater "refuges": crevices in rocky or reef points, near to the nesting beaches. Nesting season occurs in summer and spring with variations according to the latitude and geographical characteristics of the coasts. Deposit 40 to 190 eggs on each occasion with a mean of 110 eggs and a maximum of 560 eggs per season. Reproductive cycle is 2 to 3 years; but in some, population may shift from 1 cycle to another (Ref. 1397). Enters brackish water estuaries but also found in open water seas (Ref. 417). Habitat is a shallow thermocline at 50 m with strong thermal and chlorophyll gradients and surface convergent fronts (Ref. 78527). They are observed to reposition themselves in a particular area on a daily basis to take advantage of thermal hotspots within a highly dynamic thermal environment (Ref. 81016). Diving behavior of loggerheads on seabed and pelagically mid-water is observed for travel and foraging during their inter-nesting interval; there is a preference of mid-water resting during travel with a seabed alternative to conserve its resources. This behavior is observed to be locally adapted (Ref. 66292). Aggressive behavior between females has 4 stages (1) initial contact: once intruders entered the visual range of residents, (2) passive confrontation: wide head-tail circling maintaining a distance of 1.5 m, (3) aggressive confrontation: starts when a turtle stops circling to face the other head-on; then sparring starts wherein they snap at each others' jaws while holding defensive horizontal positions in the water column; it progresses to close circling and snapping at the posterior carapace and/or flippers of the other followed by chasing and snapping at the neck and/or central carapace, and (4) separation: may be mutual wherein they swim in opposite directions or may involve a brief chasing of the other out of the vicinity. During contests, established female loggerheads were more likely to win both passive and aggressive contests. This is usually seen in resting site locations (Ref. 81015). Little information is available on the feeding behavior of post-hatchlings in pelagic waters, but they are most likely exclusively carnivorous, feeding on invertebrates and fish eggs. Juveniles and adults consume benthic invertebrates and occasionally fishes. (Ref. 122680). Feeds on wide variety of invertebrates such as crabs, jellyfish, prawns, gastropods and pelycepods (Ref. 97534), especially bony fishes (Refs. 804, 97534). Length measured as straight carapace length. 50 to 64 days incubation period (Ref. 1397).

Nesting grounds associated with underwater "refuges": crevices in rocky or reef points, near to the nesting beaches. Summer and spring with variations according to the latitude and geographical characteristics of the coasts. Renesting frequency intervals of 2 weeks, depositing on each occasion 40 to 190 eggs. Mean of 110 eggs laid with a maximum of 560 eggs per season. Reproductive cycle is 2 to 3 years; but in some, population may shift from 1 cycle to another (Ref. 1397). Reproductive interval is much shorter for males compared to females (Ref. 86782).