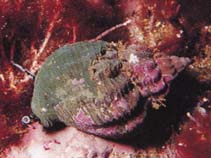 Shell: not very thick, solid, conical spire, generally high, sometimes rather flattened spires, very convex whorls and markedly impressed suture; ovoidal aperture, outer lip is not thickened or toothed, lacks inner folds; columellar lip has a fairly striking callus, partly adheres to the ventral surface of the body whorl; sculpture has almost equidistant spiral grooves and quite big axial ribs that tend to fade at the edge of the body whorl and are generally sinous; yellowish white or light hazel in color; periostracum is light chestnut in color and not very resistant; operculum is horny, smaller than the aperture, has a central nucleus. Body: large foot, whole body cream with blackish patches; head has a pair of tentacles with an eye at the base of each, long proboscis; well-developed siphon; radula is rachnioglossan.
Maximum depth from Ref. 106864. Common in the continental shelf (Ref. 106864). Common in the subtidal to 200 m depth in the northern Atlantic (Ref. 78657). Usually found on hard bottoms (Ref. 95730), as well as soft bottoms from 5 to 600 m (Ref. 106864). Also found to occur in areas with sludge (Ref. 96352). Relatively sedentary (Ref. 106864). It is a necrophagous, scavenger species (Ref. 96498). Feeds on polychaetes, molluscs, echinoderms and other smaller crustaceans (Ref. 106864). Also found in mud, sand, gravel and rocks (Ref. 78654). Females gather in groups to deposit eggs in a communal mass of egg capsules where veligers develop and metamorphose inside and later hatch out as young individuals (Ref. 360).

Females gather in groups to deposit eggs in a communal mass of egg capsules where veligers develop and metamorphose inside and later hatch out as young individuals (Ref. 360).