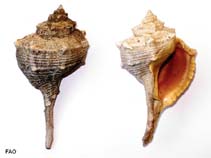 Eastern Atlantic and the Mediterranean: from Portugal to central Morocco in the Atlantic, and east to Lebanon. Introduced in Atlantic Spain.

Showed an annual reproductive cycle in the Catalan coast. The reproductive cycle had two peaks (April and June -July) but the first one seems to be less important because the number of immature females is higher than the mature ones.


Fisheries: commercial
| FishSource | Sea Around Us